Toronto, Canada / January 03, 2022 / SEAPRWire / TOAD.PNG, a new collectible series of NFTs, is minting in late December through early January, created by ARTBAD, a trans-national brother/sister coding/artist duo that designs and creates “weird NFT” projects. A direct competitor to NFT series such as Bored Ape Yacht Club, Cryptokitties, and SupDucks, TOAD.PNGs “are down to have a chill time, love being a little weird, and can’t help vibing so hard, even if they wanted to,” according to a statement by the creators.

The members of ARTBAD itself have interesting pedigree; at the center is a team of two siblings – “John” and “Z”. John is an engineer who has worked at Microsoft, Google, Facebook, and Protocol Labs; and Z is an award-winning artist whose clients include NBC. 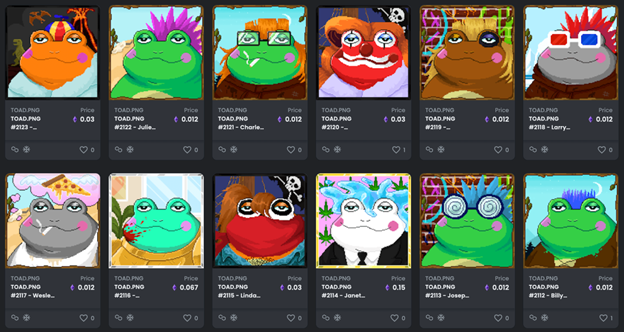 So what does TOAD.PNG have over its competitors?

The Common Toad category has 7,620,480 total possible combinations of features, of which 6,000 will be generated. Common Toads “may not live charmed lives, and sometimes have to struggle, but they are down to chill and always up for a good time.” The artwork for Common Toads features a rustic wood picture frame. Examples of Common assets include a stained tank top, desert background, and plain brown skin.

In the Uncommon Toad category, there are 11,557,728 total possible combinations of features, of which 2,400 will be generated. Uncommon Toads “are growing up and learning to express themselves, and are in the process of figuring out what they’re into and what works for them.” These Toads feature a black picture frame. Examples of Uncommon assets include a leather jacket, prehistoric background, and red skin.

There are 8,176,896 total possible combinations of features in the Rare Toad category, of which 1,100 will be generated. Rare Toads are “hustlers who work hard and play hard. They have interesting hidden lives that they fund with good-paying jobs.” Rare Toads feature a silver picture frame. Examples of Rare assets are a sweater vest, an upscale apartment background, and cerulean skin.

The Legendary Toad category has 1,270,080 total possible combinations of features, of which 500 will be generated. The Legendary Toads “are high-ranking members of society with influence, power, and privilege, who are frequently possessed with supernatural powers. Crossing them or messing with them is a bad move.” Legendary toads feature a shiny gold picture frame, and can include assets like a formal gown, a ruby tuxedo, or hair made of elemental magic.

There will be weekly drops of Exotic Toads – special TOAD.PNGs that share assets with no other TOAD.PNG. Exotic Toads are bespoke and made from scratch, meaning that every aspect of an Exotic Toad is unique, from the skin to the background to the accessories to the facial features.

The first and second Exotic toads have dropped, with the first being a toad based on Seong Gi-Hun, the main character from Netflix’s Squid Game, and the second being Bulma from Dragon Ball Z. All Exotic toads will be sold on OpenSea at auction instead of a fixed price on OpenSea. Both auctions are live as of this writing.

The article is provided by a third-party content provider. SEAPRWire ( www.seaprwire.com ) makes no warranties or representations in connection therewith. Any questions, please contact cs/at/SEAPRWire.com